Why is culture important?

Learn more about the significance of culture, which will be covered from different perspectives, like the comprehension of the individual, social, economic, political and psychological aspects. Apply your knowledge to GP Essay and Comprehension Questions to ace the A Level GP examination. 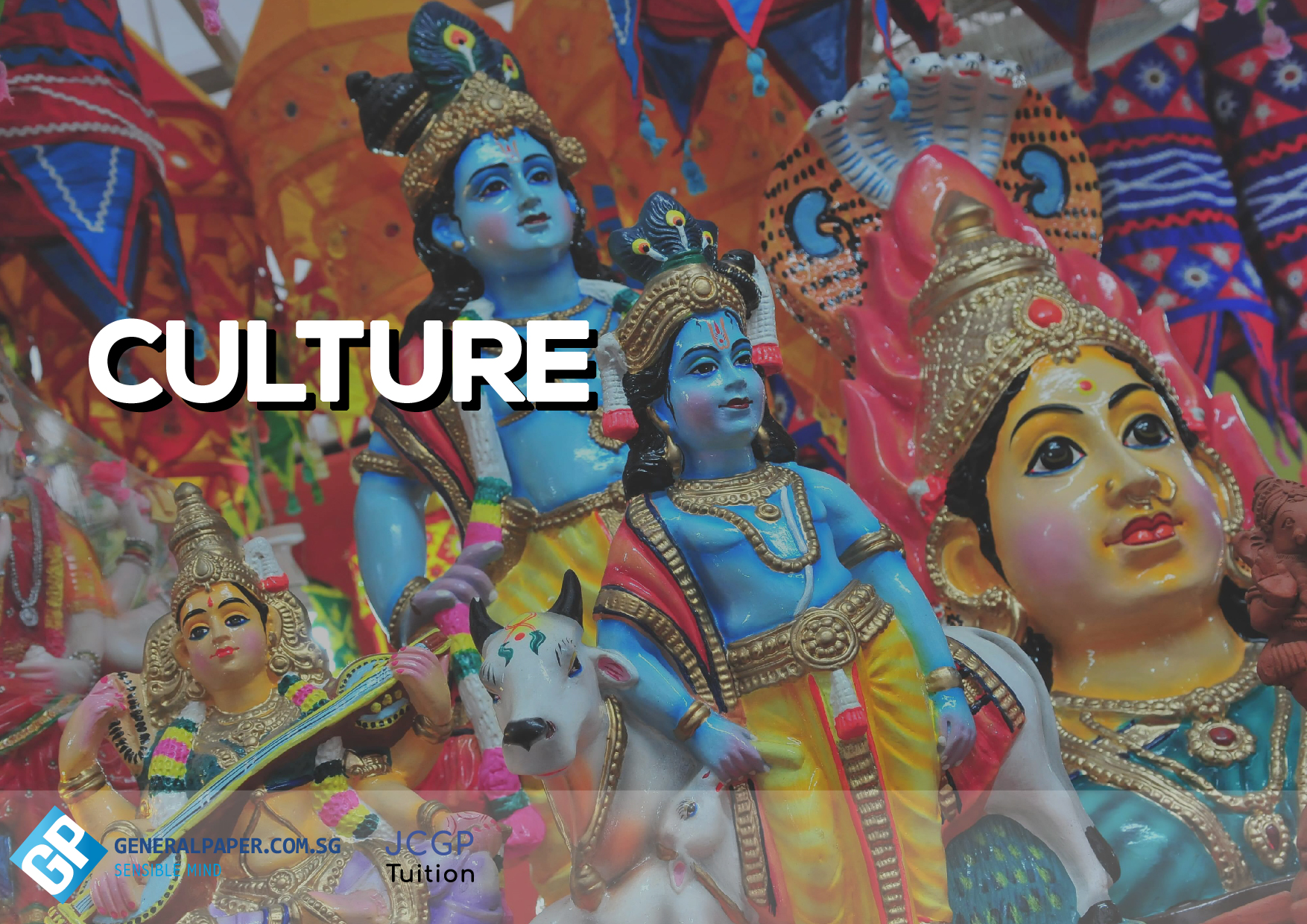 How is culture important?

How is culture important to us? View our GP Tuition Notes on Culture to reinforce your comprehension of cultural influences in the modern societies. We will discuss the individual, social, economic, political and psychological areas of concerns to support your learning of this GP topics.

Video #1: What is cultural diversity?

Culture refers to the set of shared beliefs and common behaviors of a particular group. Culture diversity, therefore, denotes the coexistence of various cultures within society. This implies that people will have to learn to appreciate and understand each other’s differences.

However, with so many people of different cultures and backgrounds mixing together in the modern world, there is bound to be a mixing of cultures and therefore a dilution in certain culture. This is because a homogeneous set of beliefs and values will tend to be promoted and thus individual identity may be lost in the process. Therefore, cultural diversity is being threatened in this globalized world as archaic cultures become less relevant.

Culture is important because it influences the way we live our lives in terms of the way we interact (social), the way we work (economic), the way we behave (individual), and the way we govern (political).

Culture affects our daily lives as it forms part of our personal identities which will shape the way we live our lives, such as the way we dress, eat, converse and think because culture dictates how the people around us act. Hence we will in turn naturally act and behave the same ways. For example, in Singapore due to our culture of being ‘kiasu’ (afraid of losing out), Singaporeans tend to be more self-centered, hence there being cases such as there being a need for designated reserved seats for the elderly in buses and trains so that when the younger and more fit people refuse to give up their seats, the elderly, disabled or pregnant are able to still get seats.

Social: How culture affects the way we behave?

Culture influences our social interaction such as how we communicate with others as it sets the ways we prefer and tend to communicate with. An example would be with how because currently almost everyone has a phone and internet, people tend to communicate through communication apps such as WhatsApp, which has over one billion users. In addition, culture shapes our behaviour which may give rise to seldom, yet unintended conflicts due to misunderstandings. For example, the Chinese set chopsticks upright in rice bowls when making offerings to their ancestors. When people of other races come to a Chinese restaurant, they may stick their chopsticks in their rice bowls because they want to put the chopstick down and that would be convenient, without understanding that it means something to the Chinese. Hence this might bring about a misunderstanding as it could be considered as rude.

Economic: How culture affects the way we work?

Culture impacts the economic developments as it shapes our mindsets and values which then influences our behaviours at work. This could be because of the social pressure too to do what your peers are doing. An example would be in Singapore, where because it is a very small country, we have a very competitive culture as we need to work hard to go far and be successful. This then causes Singaporean workers to be hard workers, often working overtime to complete more work and to please their employers. Culture can also shape career preferences and choices. This can also be seen in Singapore where jobs such as being construction workers or cleaners are often seen as low wage jobs, and because it is tiring and require a lot of manual work, many Singaporeans would rather not work these jobs if they have the choice.

Political: How culture affects the way we govern?

Culture affects the political developments of countries which can serve as supporting pillars or even obstacles. This can be seen in terms of cultural influences that shapes the perceptions of individuals to advocate policy changes. Alternatively, the clash of cultures can give rise to conflicts that destabilizes societies. For instance, some white Americans typically consider raised voices to be a sign that a fight has begun, while some black, Jewish and Italian Americans often feel that an increase in volume is a sign of an exciting conversation among friends. Thus, some white Americans may react with greater alarm or take offence to a loud discussion.